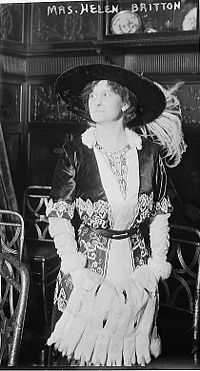 Helene Hathaway Robison Britton was the first woman to run a baseball franchise. She inherited the St. Louis Cardinals from her uncle Stanley Robison in 1911. She had to fight other owners, who did not like the idea of a woman joining their exclusive club, but by 1916 was holding the office of team president herself. She worked on attracting more female fans to the ballpark by multiplying the number of Ladies Days. She divorced her husband Schuyler Britton when he proved to be a lay-about drunkard and womanizer.

After the 1916 season, having found the responsibilities of the day-to-day running of the club excessive and in a precarious financial state, she decided to sell the team. The team's legal counsel, attorney James Jones put together a group of local businessmen who made an offer of $375,000. The sale was made, but Helene Britton had to file lawsuits to receive the full payment.