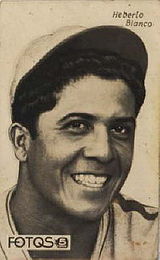 Heberto Blanco was a Cuban infielder of the 1940s who also played in the Negro Leagues, Mexican League and US minors. He was the younger brother of Carlos Blanco. Heberto was noted primarily for his defensive skill.

Blanco debuted in 1940-1941 with Santa Clara, hitting .266 and slugging .277 as a part-time shortstop. He came to the US in 1941 and hit just .145 as the second baseman for the New York Cubans. At age 21 in 1941-1942, he hit .243 and slugged .250 for Habana, playing second base alongside his bother, the club's first baseman. Heberto won Cuban Winter League All-Star honors at second base, presumably due to his defense. In 1942, he hit .284 while playing short for the New York club. In the first East-West Game in 1942, he pinch-ran for Tetelo Vargas in the 8th inning and stayed in the game at second base, replacing Sammy Bankhead, who took Vargas's spot in center. Blanco did not bat. In the second game, Heberto was 0 for 1 with a walk and a run after replacing Bankhead at second base in a 9-2 rout by the East.

Blanco remained in Cuba after the Cuban Revolution, helping train young players, including Rey Vicente Anglada. Prior to his death in 2011, he was one of the last Cuban Winter Leaguers still living in Cuba.