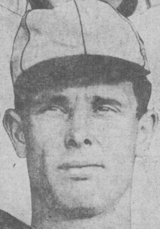 George Cutshaw played second base for the Bloomington Bloomers on May 30, 1909 when they lost a game, 2-1, in 26 innings to the Decatur Commodores. The game was the longest ever played in professional baseball at the time, and would not be topped until 1960. Cutshaw was the only one of the players in the game to play in the major leagues. He went 1 for 9 that day.