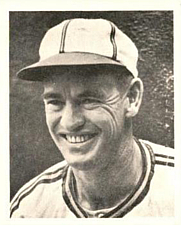 George Caster was a hard-luck starting pitcher who found his way as an ace reliever upon a change of scenery. He is the all-time saves leader in St. Louis Browns history with 28.

Originally a Mack man with the Philadelphia Athletics, George arrived to the big leagues in 1934 and served an apprenticeship in relief before joining the starting rotation in 1937. Of his 114 starts in the next four seasons (including a league-leading 40 in 1938), George tossed complete games in one-half of them (57) while exceeding 200 innings twice. That is where the good news ends. For the span, George was 41-67, leading the American League in losses twice with two seasons of 19 losses and one of 20. His ERA was never lower than 4.35 and exceeded 6 during his bottoming out, a 4-19, 6.25 season in 1940.

The St. Louis Browns took a chance on Caster, claiming him on waivers before the 1941 season. After a mediocre beginning as a swingman, George was one of the Brownies' most valuable pitchers from 1942 to 1944. Exclusively coming on in relief, George finished almost every game he appeared in with an ERA under 3 each year. He is recognized as the retroactive AL saves champion in the Browns' pennant season of 1944, earning 12 with a 6-6, 2.44 record. The Browns made it to the World Series, but he did not pitch, and he then imploded in 1945 to a 6.89 ERA. He moved to the Detroit Tigers before the end of that season, pitched a lot better, and made his lone appearance in the Fall Classic with them that year, pitching a scoreless two-thirds of an inning against the Chicago Cubs.

George later managed the Riverside Rubes of the Sunset League for the first part of the 1948 season. On December 18, 1955, he died after suffering a heart attack at a Christmas party.