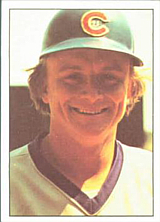 Gene Hiser, who was at the University of Maryland in 1968-1970 at the same time as Jim Norris, was a first-round pick by the Chicago Cubs in the 1970 amateur draft. By 1971 he was in the majors and spent five seasons with the Cubs. Gene only committed 1 career error in 115 games, 114 in the outfield and 1 at first base.

After baseball he formed the financial management firm of Barrett and Hiser and stayed with them when they joined GCG Financial.