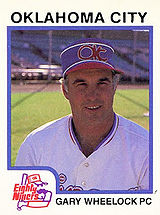 Gary Wheelock has been a coach in the Seattle Mariners organization since 1984. He pitched in the majors with the California Angels in 1976 and with the Mariners in 1977 and 1980, and had a minor league career of seven seasons. His 15-8 record for the 1976 Salt Lake City Gulls led the team in wins. He saw most of his action as a member of the expansion Mariners' starting rotation in the first half of their inaugural season in 1977.