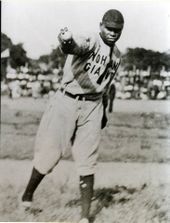 Frank Wickware was a hard-throwing Negro League hurler of the 1910s.

Wickware was born a year after Walter Johnson and grew up in the same town. This led to Frank's sometimes being called the black Walter Johnson. Frank made his debut with the Leland Giants; in 1910, the 22-year-old went 6-0 with a 2.88 RA. He led pitchers on top-flight black teams in wins and was third among midwestern teams in RA. He went 1-1 against Cuban All-Star teams that winter in exhibitions. Wickware also pitched in the California Winter League, going 2-2 with 27 strikeouts in 30 innings.

Frank fell to 2-2 in 1911. In early 1912, he returned to Cuba and went 10-4 for Club Fe. He tied Smokey Joe Williams for the Cuban Winter League lead in wins; Wickware's effort was especially impressive as the rest of the last-place staff went 4-14 and these weren't pathetic hurlers in Dick Redding (4-8) and Dolf Luque (0-4).

Wickware fell to 2-5 for the Chicago American Giants in 1912, though he was 2-0 with the Brooklyn Royal Giants. The Kansas native was 2-1 for the Schenectady Mohawk Giants in 1913. That year, he battled fellow Walter Johnson in an exhibition, which Wickware won 1-0. Wickware reportedly split two other exhibition matches with Johnson in 1913-1914.

He reportedly once called in the outfield with 2 outs in the 9th inning and struck out the last batter; similar feats have been attributed to other Negro League hurlers. Both the Chicago American Giants and New York Lincoln Giants signed Wickware for a postseason game, which resulted in a legal dispute.

In 1914, Wickware pitched for Chicago (6-1) and the Mohawk Giants (0-3). On August 26, while with Chicago, Frank had the best game of his career, almost throwing a perfect game against the Indianapolis ABCs. He walked the leadoff batter, who was caught stealing, then retired 26 in a row.

Wickware posted a 5-5 record for Chicago in 1915. He pitched both ends of a doubleheader one day against the Lincoln Giants, winning 2-1 and losing 1-0. In Cuba for a final winter, he was 2-4 for San Francisco, a club that went 4-33 when other hurlers got the decision and 1-30 when pitchers other than Smokey Joe Williams or Wickware got the decision. He also spent time in the California Winter League in 1915-1916, with a 6-1 record. He led the league in wins, complete games (4), innings (46), strikeouts (28, 1 ahead of Smokey Joe Williams) and shutouts (2).

The veteran right-hander went 1-2 for Chicago in 1918 before he entered the Army and served during World War I. He came out of service in enough time to pitch briefly in 1919, appearing for both the Detroit Stars (0-2) and Chicago (0-1). Alcoholism and control problems were causing him to decline by this point in his career.

Wickware returned to Schenectady after his career ended and according to James Riley, "faded into obscurity" until his death at age 79.

Wickware was nominated for the Hall of Fame. in the 2006 Special Committee on the Negro Leagues Election but failed to make it past the first ballot.

This biographical article is missing the person's: height weight
Retrieved from "https://bpv.baseball-reference.com/bpv/index.php?title=Frank_Wickware&oldid=1103116"
Categories: