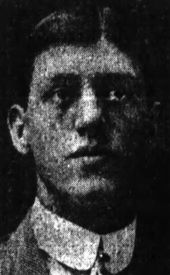 Frank Gibson played most of his major league career for the Boston Braves in the 1920's. During the three year period of 1922-24, when the Braves lost 100 games each year, Frank was one of the best hitters on the team, batting at least .299 each year.

He started in the minors at age 20, and except for a brief stint with the 1913 Tigers, he was in the minors until he joined the Braves at age 30. After his time in the majors, he played four more seasons in the minors.

Not the most well known Gibson to have played the catcher position for the Tigers, Frank Gibson's minor league managing career lasted just one year, when he led the San Antonio Bears in 1928. The team finished fifth in the Texas League with a 76-83 record.

After his baseball career, he worked over 30 years in the City of Austin, TX's power department.