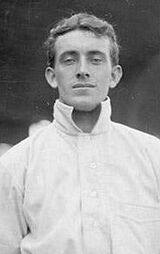 “[I] used to do all sorts of experiments with the ball... and one day I noticed that whenever I wet my fingers to get a grip on an otherwise slippery ball, it would take peculiar shoots. I talked to Stricklett about it and together we worked on the thing until we finally managed to get the ball to obey nicely with the moist place on its side.” - Frank Corridon, to the Fresno Morning Republican, November 23, 1909 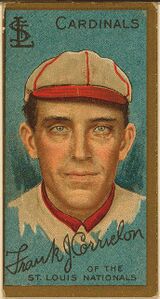 Frank Corridon may be the inventor of the spitball. He won 70 games in six big league seasons.

A letter from pitcher (and later umpire) George Hildebrand indicates that Hildebrand was with the Providence Grays in 1902 and learned about the spitball from Corridon. He and Corridon experimented together as to the best amount of wetness. At the time, such a pitch was not illegal. When Hildebrand came to the majors, he taught it to others, who in turn taught it to others, and the rest is history.

Corridon reached the big leagues in 1904, splitting his first season between the Chicago Cubs and Philadelphia Phillies. With the Phils, he would enjoy much of his big league success, winning in double figures four times (including a 18-14, 2.46 line with 131 strikeouts in 1907). For his career, he finished with a 70-67 record and 2.80 ERA during the dead ball era. In 1909, with the Phillies, his 2.11 ERA was 10th in the National League. He also played in 8 games as a position player during his career. He later managed the Springfield Ponies in the Eastern Association for part of 1913.