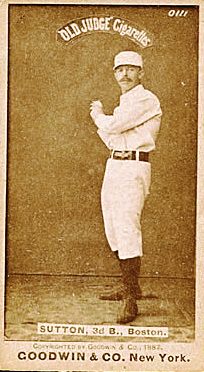 "Sutton, of the Bostons, was a great player ten years ago, and even now is the leading batsman of his club, and considered one of the very best of this country. . . Up to 1876 Sutton was the finest thrower from third to first that ever filled that position." - Tim Murnane in Sporting Life, March 24, 1886

Ezra Sutton was an excellent third baseman for many years in the early days of baseball. Before professional baseball was started, he played for an amateur club in Cleveland in 1870. During the days of the National Association, he played first for the Cleveland Forest Citys and then after their demise for the Philadelphia Athletics. In 1876, when the National League got its start, he played for the Athletics and then spent the remaining 12 years of his major league career in Boston, for the team first known as the Boston Red Caps and later as the Boston Beaneaters.

In 1884, as one of the oldest players in the league, he was third in batting and first in hits and singles.

Primarily a third baseman, he also played many games at the other infield positions and in the outfield. He pitched in 2 games in 1875, but was not effective. He umpired four games in the National Association in 1875 and one on the National League in 1876.

The biography at baseballlibrary.com says he died crippled and impoverished. His obituary in the June 29, 1907 Sporting Life called him "one of the greatest base ball players the game has produced". It stated that he started playing in 1869, and that "previous to 1876 he was probably the most powerful thrower that ever donned a uniform, but in that year he hurt his arm . . .". He was in the ice business from 1886-1890.