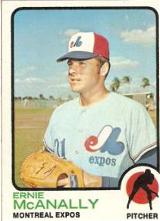 A former outfielder, Ernie McAnally switched to pitching in 1968 because he felt he was lacking as a hitter. He responded with a 9-7 record for the Visalia Mets of the class A California League and three years later was in the majors. Equipped with a super fastball and a sinker, he was 10-4 as a starter for the Montreal Expos after the 1971 All-Star break.