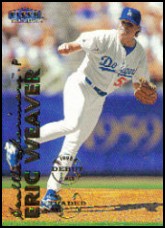 Eric Weaver had three seasons in the majors with three different teams. In the minors, he pitched 12 seasons, starting out primarily as a starter but ending up as a reliever. He was in the Los Angeles Dodgers organization from 1992 to 1998. In his 12 years in the minors, he had 50 victories and 28 saves.

Weaver was the least successful pitcher for the United States in the 1991 World Junior Championship when they won Bronze. He was 1-0 with a 7.72 ERA, allowing 10 hits in 4 2/3 IP over four games. He was one of just two future major leaguers on the staff, though; Carlton Loewer was the other one.

He works at Northwestern Mutual and is an assistant coach at Lincoln Land Community College.