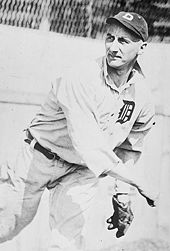 Eric Erickson was one of the few major league players born in Sweden. In addition to his seven years in the majors, he also pitched for several minor league teams, winning 31 games for the 1917 San Francisco Seals. Most of his major league appearances were with the Washington Senators, where he was in the starting rotation with Walter Johnson for several years.

In his only appearance of 1914, Erickson gave up seven runs in five innings. None of the runs he gave up were earned, oddly.

Many years after his retirement, in 1930, he pitched one game for a Celoron, NY team that played the barnstorming Boston Braves. Erickson one-hit them and won 3-0, driving in all of his team's runs.

After his days in professional baseball, he worked in the shipping department of a metal company and also ran a farm.