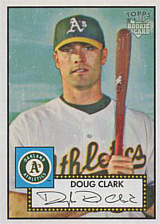 Doug Clark was drafted by the San Francisco Giants twice, signing after being picked in the 7th round in 1998. He had attended the UMass, receiving a degree in biology, originally playing football before switching back to the diamond for the first time since before high school. Doug steadily climbed the ladder, hitting .300 routinely in A ball and eclipsing the mark in Double A and Triple A while hitting .298 with 10 home runs, 13 triples and 33 steals in 2004. He made his big league debut in 2005 with the Giants, playing 8 hitless games. He moved to the Oakland A's organizatin in 2006, earning another look (6 games, 1-for-6) after belting 15 homers and stealing 25 bases with the Sacramento RiverCats. He played in the Mexican Pacific League during 2006-2007, then finished his playing career with time in the KBO and Mexican League.

Clark became a coach with the AZL Giants in 2015, Augusta GreenJackets in 2016, AZL Giants Orange in 2018, and Salem-Keizer Volcanoes in 2019. He was scheduled be hitting coach of the Richmond Flying Squirrels in 2020 before the season was cancelled due to Covid-19.