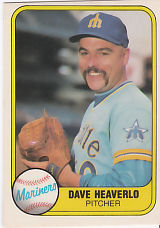 He attended Moses Lake High School in Moses Lake, Washington, graduating in 1968. He went on to Central Washington State College, in Ellensburg, WA, where he graduated in 1973. For his baseball contributions, he is a member of the school Hall of Fame at both his high school[1] and university.

Heaverlo pitched for the San Francisco Giants, the Oakland Athletics, and the Seattle Mariners. He made his major-league debut on April 14, 1975 for the Giants and pitched his last game on September 27, 1981 for the Athletics. He earned a reputation as a jokester. He shaved his head and insisted on keeping his non-roster number 60 as a rookie.[2]

Heaverlo was the pitching coach for the Big Bend Vikings in Moses Lake, Washington for a time. He also hosts a radio talk show.[3]

He is the father of Jeff Heaverlo, who was a minor league pitcher in the Seattle Mariners and Los Angeles Angels organizations.