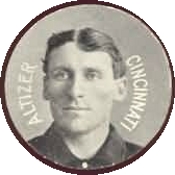 Dave Altizer was a versatile player during six seasons in the big leagues, appearing in 223 games at shortstop, 105 in the outfield (mostly in center and right), 101 at first base, 39 at second base and 16 at third base. As a hitter, his OPS+ was exactly 100, while as a base stealer he was twice in the top five in the league. He also led the 1909 American League in hit-by-pitch.

He made his major league debut at age 29. His minor league career stretched 16 seasons from 1902 to 1921, with the bulk of it spent in Minneapolis, where he hit over .300 five times and was on four pennant-winning teams. He managed at Aberdeen and Madison. While managing Aberdeen one night, he and the team's catcher had a disagreement and fought in an alley.