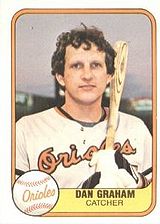 Catcher Dan Graham had a brief moment of success in the majors, hitting .311 with 11 home runs and 43 RBIs over 51 games post-All Star break for the 1980 Baltimore Orioles. Unfortunately his results with the Orioles tanked in 1981, batting .176/.244/.239 with just 2 homers over 55 games. Compounding the hitting woes he had problems in the field where he committed 7 passed balls and allowed 17 wild pitches in just 40 games at catcher. By 1982 the O's had moved on, bringing in Joe Nolan to share catching duties with Rick Dempsey. Graham never again appeared in the big leagues, playing a final minor league season in 1982 for the Triple A Rochester Red Wings.