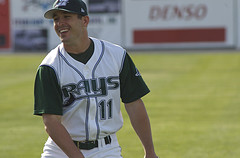 Outfielder Chris Cunningham was selected by the Tampa Bay Devil Rays in the 12th round of the 2004 amateur draft and made his pro debut with the Princeton Devil Rays that summer, hitting .259/.365/.397 and tying for the team lead with 31 runs.

With Princeton again the following year, he hit .329, fourth-best in the Appalachian League. He had a .433 OBP and .491 slugging percentage, 42 runs and 40 RBI in 59 games. He was second in the Appy League in OBP behind Rene Agueron. He was named to the Appy League All-Star outfield alongside a fellow Cunningham, Aaron Cunningham, as well as Jacob Butler.

Overall, he played four seasons in the Devil Rays organization, never reaching above the Class A level. His career batting line was .272/.367/.394 in 252 games.