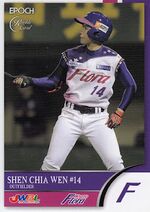 Chia-Wen Shen has starred for the Taiwanese women's national team.

Shen played softball before switching to baseball and appearing in the 2016 Women's Baseball World Cup. She had three-run games against Australia and Hong Kong and had Taiwan's only hit off Japan's Nana Sasanuma to avoid a no-hitter. She finished at .450/.542/.700 with 8 runs in 8 games; in right field, she had 8 putouts, 2 assists and no errors. The only downfall was her base-stealing as she was 1 for 3. She tied for 6th in the Cup in runs, tied for 8th in hits, tied for the triple lead (2, even with Malaika Underwood, Sascha Egas and Lok-Hang Hui), tied Yuki Kawabata and Brittany Gomez for 5th in total bases (14), was 7th in average among those with 15+ AB (between Pascale Jalbert and Yaya Kojima), ranked 6th in slugging (between Kawabata and Megan Baltzell), was 7th in OBP (between Astrid Rodriguez and Kojima) and was 6th in OPS (between Kawabata and Kojima). She was named to the All-Star outfield alongside Tammy McMillan and Gomez. [1]

She was the first Taiwanese player in the Japanese Women's Baseball League, playing with the Kyoto Flora in 2018, but left the team due to family reasons. [2] In the 2018 Women's Baseball World Cup, she again starred. She drove in 3 versus South Korea, scored the winning run in extra innings against the Dominican Republic and scored the only run in a 2-1 loss to Japan, Japan's 28th straight WBWC win as they faced a rare scare. She hit .423/.516/.538 for the Cup, with 8 runs in 9 games and 4 steals in 5 tries, handling 9 putouts and making one error. Hitting cleanup in the Gold Medal Game, she was 0 for 3 against Ayami Sato in a loss to Japan. She tied Kate Psota and Eva Torres for 6th in the Cup in hits (11), tied for 5th in doubles (3) and tied for 9th in swipes. She again made All-World, joining Iori Miura and Kelsey Lalor in the outfield. [3]