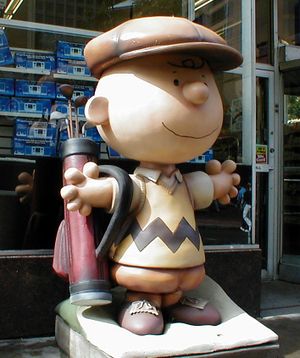 Charles "Charlie" Brown is the main character in the Peanuts comic strip, created by Charles M. Schulz. Portrayed as the lovable loser, he shows endless determination and hope despite being insecure about many things in his life. He is perhaps best known for his stubborn determination to win a baseball game, and for refusing to give in when all seems lost (he can be seen standing on the pitcher's mound alone during a torrential downpour, refusing to let a little rain ruin his beloved baseball game).

Brown gave up an unusual number of line drives up the middle. He did hit a game-winning home run off a pitch by Roy Hobbs' great-granddaughter on March 30, 1993, although it was later revealed that she let him hit the home runs. In the final weeks of the comic strip's run in 2000, he tried to channel the great Joe Torre, determined to finally have a winning baseball season.

Charlie Brown also attempted to play football, but was never able to kick the ball, because his friend Lucy would pull it away as he would approach, causing him to land hard on his back.

Sources: http://en.wikipedia.org/wiki/Charlie_Brown Some or all content from this article is licensed under the GNU Free Documentation License. It uses material from the Wikipedia article "Peanuts".