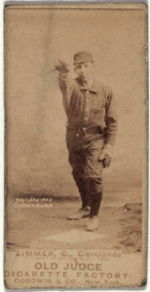 Chief Zimmer was a catcher from 1884 to 1903. He broke into professional ball in 1884, and came to the majors also that year. He was called one of baseball's "iron men" because he caught more games in 1890-1892 than catchers normally did.

He was a decent hitter, especially for a catcher, and his skills allowed him to stick around in the majors even when he was the oldest player there.

An article in Baseball Digest in 2001 looked at major league career leaders by letters of the alphabet. Zimmer was one of the leaders in most categories, along with other long-time ballplayers whose names started with Z: Heinie Zimmerman, Richie Zisk, Todd Zeile, and Gus Zernial.

He managed the 1903 Philadelphia Phillies. Zimmer was an umpire in the National League in 1904, working a full slate of games that year. before that he had served as a fill-in umpire for one game each in the American Association in 1888 and in the NL in 1889 and 1901.