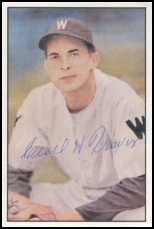 Cecil Travis was a shortstop who spent his entire career with the Washington Senators. Many who saw Travis play, believe he was destined for the Hall of Fame until his career was curtailed by World War II. Even now he has proponents - he received 15% of the vote in the 2007 Hall of Fame voting by the Veterans Committee.

In 1942, Travis found himself playing baseball in the Army, appearing with the Camp Wheeler Spokes in the Georgia state semi-pro tournament that season. Travis and the Spokes went to the National Semipro Tournament in Wichita, KS in 1943 and won it all. Travis continued to play Army ball in 1944, this time with Wisconsin's Camp McCoy Engineers, and just missed another trip to Wichita. Tech. Sgt. Cecil Travis finally saw action in Europe between November '44 and August '45, suffering frostbite on two toes during the Battle of the Bulge. He returned with a Bronze Star, three battle stars, and part of a foot amputated; this injury threw off his balance when he rejoined the Senators in September.

Travis was unable to shake the rust and was out of baseball at age 34. He returned to his childhood farm in Georgia, where he died in 2006 at the age of 93.

Also, Travis' four most similar players, and 5 of his top nine, through age 27 are Hall-of-Fame players. This would suggest the kind of career Travis was in the middle of when he left for war. However, the list of could-have-been-a-Hall-of-Famers is much longer than the list of actual Hall-of-Famers.