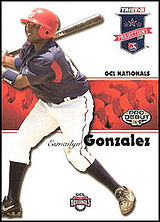 The Washington Nationals and special assistant Jose Rijo signed 16-year-old shortstop Esmailyn "Smiley" Gonzalez for $1.4 million in July 2006 and held a news conference at which general manager Jim Bowden compared the player to Ozzie Smith. Gonzalez hit .245/.382/.311 as the shortstop for the 2007 GCL Nationals. He improved significantly in 2008, hitting .343/.431/.475 with 42 runs in 51 games. He led the Gulf Coast League in average, tied for second in hits (52), was second in OBP and was third in RBI (33). He led league shortstops with 84 putouts. He won the MVP award and made the league All-Star team at shortstop. Baseball America rated him the #14 prospect in the league.

In February 2009, it was announced that Gonzalez was actually Carlos David Alvarez Lugo, born in November 1985. This made him four years older than originally claimed - and consequently much less of a prospect.

It is claimed that this change of identity was a conspiracy involving several individuals. Team president Stan Kasten was quoted as saying that he has "people examining all possible avenues of recourse, with regards to any legal and financial concerns.” He went on to say that “I’m angry. I’m very angry. We’ve been defrauded.” The controversy cost GM Jim Bowden and assistant Jose Rijo their jobs.

Alvarez never made it out of A ball.