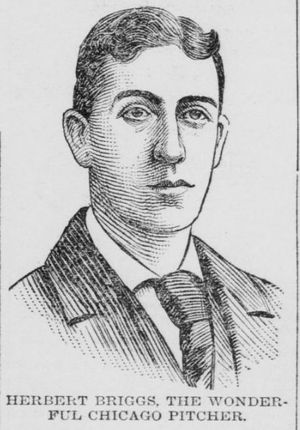 "Briggs was nicknamed 'Buttons' by his teammates. When he first joined the Chicago team in 1896, he wore a long gray robe in the locker room that had huge, white pearl buttons down the front. About all his teammates could see was the huge white buttons when they looked his way." - James K. Skipper Jr., Baseball Nicknames

Pitcher Buttons Briggs played for the Chicago Colts of the National League from 1896 to 1898. He went 20-8 with the Toronto Maple Leafs in 1902 and returned to the majors with the Chicago Cubs in 1904 and 1905. Although he had excellent ERAs in 1904-1905, he was traded after the latter season to Brooklyn, and never again appeared in the majors. The Cubs, meanwhile, won the pennant the next three years. Briggs surfaced with Elyria in 1906.