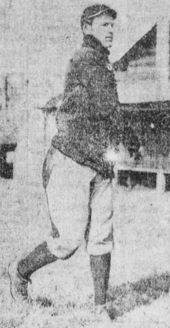 “Brown has the makings of a first-class box artist. With a strong club behind him I think he would prove to be one of the best twirlers in the league.” - A.H.C. Mitchell, Sporting Life, April 22, 1911

Charles "Buster" Brown pitched nine seasons in the majors. In none of his seasons did he have a winning record, but, to be fair, most of the teams for whom he pitched were terrible, finishing far under .500. Despite a 51-103 record, his ERA was a solid 3.21 in a deadball era.

Brown was born in Boone, IA and attended Iowa State. One site says that Brown was captain of the Iowa State team in 1905, something that was controversial because he had already played professionally. Still, he was the first Cyclone to reach to the majors. Buster played for Omaha while still in school in 1904. He came to the majors shortly after leaving school one year later. From June 1905 through June 1907 he pitched for the St. Louis Cardinals and then, in June 1907, he was traded to the Philadelphia Phillies, for whom he would play until traded in July 1909 to the Boston Doves. He played for Boston through 1913.

A source says he started his baseball career at Rock Island, IA (the source may mean Illinois, since there is a Rock Island in Illinois). After his major league days he played for Rochester and Toronto, and was under contract to Toronto at the time of his death at 32, although he was rumored as a possibility for the Sioux City team. The source indicated the potential cause of his death as "overtraining". He left behind a widow and 6-month-old son. Another source, TheDeadballEra.com, attributes his death to acute lymphangitis and phlebitis.