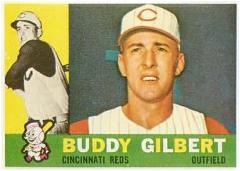 As a youngster growing up in Knoxville, TN, Buddy Gilbert was the bat boy for his hometown professional team in the Tri-State League. In 1959 he was a big league outfielder for a short stay of seven games with the Cincinnati Redlegs, picking up three base hits in 20 at-bats for a .150 batting average. Two of the hits were home runs, though, and he recalls that both came against the Pittsburg Pirates off Dick Hall and Jim Umbricht.

He also remembered a throwing contest against the great Roberto Clemente in which he was declared the winner in both distance and accuracy, and that afterwards Clemente told him: "Kid, you have a hell of an arm."

According to Curt Flood's autobiography, while playing in the minor leagues in the Jim Crow South, Gilbert would often bring meals to teammates Flood and Leo Cardenas on the team bus so they didn't have to go to the back door of restaurants to be served.

Buddy had been signed by the Cincinnati Redlegs as an amateur free agent before the 1954 season and the 6'3" outfielder played his first year in pro ball with the class D Douglas Trojans of the Georgia State League where he had a league-leading 173 base hits (including 16 home runs) and a .335 batting average with a .533 slugging percentage. The 18-year-old was also named to the All-Star team.

Gilbert spent 1960 and 1961 in part with the Seattle Rainiers and Indianapolis Indians before he finished out his eight year pro baseball career with the Nashville Vols in 1961. His numbers had tapered off and the 25-year-old outfielder decided to return to school at the University of Tennessee. From 1954 to 1961, Buddy appeared in 958 minor league contests, going to bat 3,692 times with 1,002 base hits (including 141 home runs) for a career .271 average with a .464 slug.

After baseball and school Buddy became a loan officer for the Guarantee Mortgage Company from 1964 to 1983, and for a number of years later was the owner and president of Eagle Realty Corporation in Knoxville, TN, involved in the selling of residential homes, shopping centers and business offices.