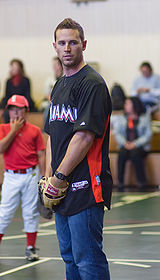 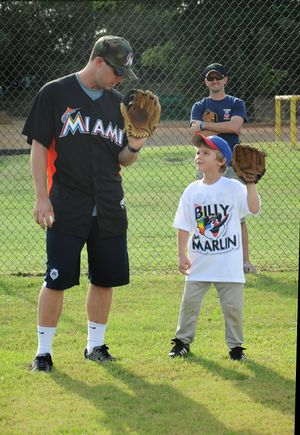 Catcher Brett Hayes was signed by the Florida Marlins and scout John Hughes as a 2nd round pick in the 2005 amateur draft and given a reported $450,000 bonus.

Hayes made his debut with the Florida Marlins in 2009, getting a hit in his first at-bat. He went 3 for 11, with a double and a home run in his first taste of major league ball, being used almost exclusively as a pinch hitter. His only presence in the field was a two-inning stint at first base.

Hayes was a teammate of Giancarlo Stanton at Notre Dame High School in Sherman Oaks, CA, when the future slugger was still known as "Mike". He was the Marlins' back-up catcher when Stanton made his much-publicized major league debut on June 8, 2010.

On May 10, 2012, Brett almost got caught in a case of "wrong place at the wrong time". Driving with his wife, his car was stuck in traffic on the Florida Turnpike near Hollywood, FL when a man toting a gun walked past the stopped car. The man had previously shot at two police officers, and killed himself a few minutes later before police could arrest him.

Hayes' father, Tim, was drafted by the Kansas City Royals in 1975, but never played pro ball.