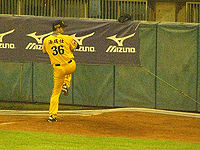 Brad Thomas played for Australia at the 2000 Sydney Olympics. In the 2007 Baseball World Cup, Thomas was 1-0 with two saves and a 2.08 ERA in five games for the Australian national team. He blew a save against the Cuban national team - entering with one out in the bottom of the 9th, he retired Alexander Mayeta and got two strikes on Frederich Cepeda before surrendering a home run. He allowed an inherited runner to score in the 9th against the Dutch national team to fall behind 3-2 but Australia rallied to win in the bottom of the 9th when Dutch closer Michiel van Kampen was even less effective. Thomas got saves against the German national team and Team Canada. The Canadian game was another close call. Thomas entered with a 7-5 lead and gave up a RBI single to Mike Saunders and a walk to Jamie Romak before getting a double play ball from Emmanuel Garcia to end the frame. The play was controversial as it was unclear if SS Brad Harman had control of the ball as he touched second base.

Thomas was the first foreigner to save 30 games in a season in the Korea Baseball Organization, doing so for the 2008 SK Wyverns. In the 2009 World Baseball Classic, he was Australia's top hurler, tossing one shutout inning with two strikeouts and no baserunners allowed.