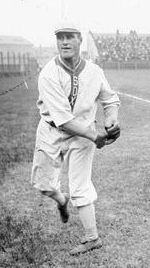 Bobby Messenger, born in Maine, played three seasons in the majors and thirteen in the minors.

The book Harry Hooper by Paul Zingg states that in 1911 Messenger won a 100-yard dash against representatives of all the American League clubs, with Hooper finishing second.

His 1909 season is high up on the list of major league seasons with the most at-bats but no RBI; he went to bat 112 times without driving in a run - although he scored 18.

Through 2008, the two other major leaguers with the same last name are Bud Messenger and Randy Messenger.

Sporting Life usually referred to him as "Bob", not Bobby.