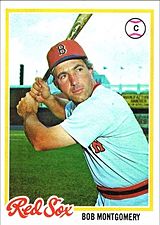 Bob Montgomery was the Boston Red Sox's backup catcher to Carlton Fisk in the 1970s. After his playing career, he became an announcer for the Red Sox in the 1980s on TV38. He partnered with Ned Martin.

He was the last big league player to refrain from wearing a batting helmet.