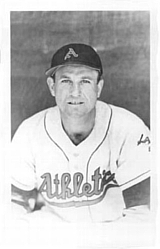 A United States Navy veteran of World War II, Bill Bradford was 27 years old when he signed his first professional contract in 1949. He was discovered pitching in a semipro league in Sacramento, CA, where he had been living since being discharged from the Navy. Bill was signed by the Yakima Bears of the Class B Western International League where he went 13-9 with a 3.96 ERA. Bill pitched seven seasons in the minors before the Kansas City Athletics liked what they saw. The Athletics purchased Bradford from the Pacific Coast League's San Francisco Seals for $75,000. Bill had been with the Seals from 1951 through 1955.

Bill made his major league debut at age 34 for the A's in 1956, allowing two runs in two innings in his only appearance in the majors. He was sent back down and spent until 1958 in the high minors, before deciding to call it a career. Besides his early semi-pro years, Bill spent ten seasons in pro baseball from 1949 through 1958. Bradford's minor league work sheet shows that he appeared in 351 games, going 90-77, pitching 1,432 innings, giving up 1,462 hits and 516 walks for a 3.53 career ERA.

After leaving the game, Bill returned to his native state of Arkansas, where he worked in law enforcement and sold real estate in Fairfield Bay. He died August 22, 2000, at the age of 78.