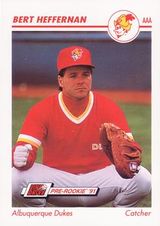 Catcher Bert Heffernan played briefly in the majors with the Seattle Mariners.

Heffernan attended Clemson University, where he caught 259 games during his college career. After hitting .331 as a sophomore, he hit .335 as a junior and was taken by the Texas Rangers in the 9th round of the 1987 amateur draft. He did not sign and instead returned to school, posting a .337 average as a senior to earn All-American honors.

Heffernan was selected by the Milwaukee Brewers in the 9th round of the 1988 amateur draft. Following the 1990 campaign, he was traded to the Los Angeles Dodgers for Darren Holmes. A year later, he was drafted away by the Mariners. He spent several weeks of the 1992 season in the majors with Seattle. He made his big league debut on May 13th, starting behind the plate against the New York Yankees, and going 1-for-3 with a double. However, that would turn out to be his only hit for the Mariners, as he was hitless in 7 more outings.