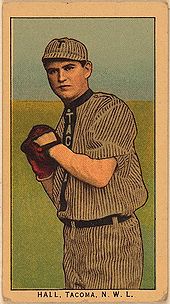 "The young fellow simply put the ball between his first two fingers, drew back his arm and let fly. The result was a lot of wiggles on the ball that had the local help completely mystified . . . " - The Neyer/James Guide to Pitchers, quoting Thorn and Holway's The Pitcher, quoting The Seattle Times from 1908

Bert Hall, who pitched seven games with the Philadelphia Phillies in 1911, also spent years pitching for Tacoma and other teams in the western USA. He won 20 games with Tacoma in 1910 and 22 with Vancouver in 1913. He may have been the first major leaguer to throw a forkball.

In 1908 he was an 18-year-old youngster pitching for Tacoma. Thorn and Holway say he learned the pitch from outfielder Mike Lynch that year. Lynch played many years for Tacoma.