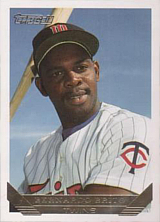 Bernardo Brito spent nearly 12 full seasons in the minor leagues, split between the Cleveland Indians and Minnesota Twins chains, before finally receiving the call to The Show in September 1992. He slugged 293 career minor league home runs, plus 50 in Nippon Professional Baseball during two seasons with the Nippon Ham Fighters in 1995 and 1996, 4 with the Sultanes de Monterrey in 21 games in 1997 and 1 with the China Times Eagles of the Chinese Professional Baseball League, also in 1997. In just 40 big league games, split among 3 seasons with the Twins, he connected for 5 in 76 plate appearances.