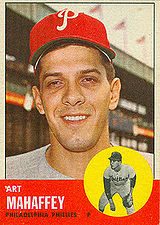 Art Mahaffey pitched seven seasons in the big leagues, most notably winning 19 games for the Philadelphia Phillies in 1962. He was named to the All-Star team in 1961 and 1962.