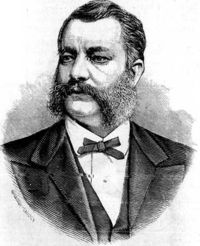 Sir Alfred Trabor Goshorn (July 15, 1833, Cincinnati, OH-February 19, 1902, Ohio) was a businessman and booster who later was the Director-General of the 1876 Centennial Exposition in Philadelphia, PA.

Goshorn was born at the family homestead in 1833. He was a graduate of the Marietta College (1854). Three years later, he earned a law degree. During the Civil War, he served in Company F, 137th Ohio Infantry as Captain. During his service, he never saw active combat, but ended up serving as an officer in a Union Prisoner of War Camp near Baltimore, Maryland. When the war ended, Goshorn opened a pain company and was a member of the Cincinnati City Council for two years.

Goshorn had a very short connection to baseball. It began on July 23, 1866 when he attended a meeting organized by J. William Johnson. He was elected president of the Cincinnati Red Stockings that same day, and would serve until prior to the start of the 1869 season, when he stepped down that April. Under Goshorn's leadership, the Red Stockings went from a strictly amateur club up to becoming a professional ball club. He was responsible for the team's affiliation with the Union Cricket Club, prior to the 1867 season, and oversaw the building of a grandstand and modern enclosure, as well as putting competitive matches on a regular basis and making Union Grounds the center of both baseball and cricket.

Starting in 1870 for the next 20 years, Goshorn organized the Cincinnati Industrial Expositions. These were public exhibitions of the arts and industries of local businesses and people of the city. Over time, these expositions would grow from city expositions to regional, with some occasionally on the national level. Plans for the Centennial Exposition, to be held in Philadelphia in 1876 to mark the 100th anniversary of the Declaration of Independence, began in 1873. Goshorn was appointed a delegate from Ohio, then became Director-General for his success with the Cincinnati Expositions. The World's Fair was a huge success, attracting millions of people from across the United States as well as from Europe. As a result, he was knighted by Queen Victoria, and is the only American to have ever received that achievement. Various dignitaries present Goshorn with books, pamphlets, and photographs. These can be seen at Goshorn's Centennial Collection at the Historical Society in Cincinnati.

Following the Centennial Exposition, Goshorn returned to Cincinnati and spent his remaining years as a civic leader, where he organized the Cincinnati Art Museum. He also continued to organize the Cincinnati Expositions.

Goshorn died on February 19, 1902 of paralysis at the age of 68. At his bequest to Marietta College, the financed A. T. Goshorn Gymnasium, opened in 1903. Goshorn is buried at Spring Grove Cemetery in Cincinnati. He is located in Garden LN Section 103, Lot 22.