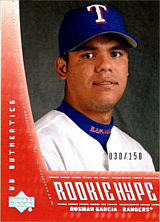 Rosman Garcia, out of Venezuela, signed as a free agent in 1996 with the New York Yankees and played in their minor league system through 2001. He was a primarily a starter from 1998 to 2000.

Garcia later played in the Baltimore Orioles chain, making 33 appearances for the Double A Bowie Baysox in 2007. He allowed no runs in four innings for the Tigres de Aragua in the 2008 Caribbean Series.

Garcia continued to pitch in the Mexican League and in Venezuelan baseball until his death in 2011 in a car accident. He was playing for Aragua at the time of the accident. The car he was driving skidded off the road and hit a tree on the highway between Maracay and Caracas.