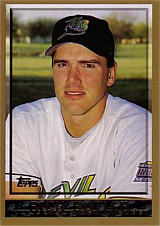 Rich Butler signed as an amateur free agent with the Toronto Blue Jays on September 24, 1990, the same day the Blue Jays took a chance on another unknown kid, Rob Butler, Rich's brother. Rob shot through the Jays system, seeing time as a contributor to the World Series team in 1993. Slow and steady Rich hit the bigs in September 1997, batting .286 (4-for-14) in a brief look. The Tampa Bay Devil Rays scooped him up in the expansion draft, with Rich seeing brief action in parts of two seasons (79 games) while slashing a meager .219/.274/.350 with 14 extra base hits (7 homers) and 20 RBI. Tampa sought to compete early while beefing up on veteran free agents, their failed plan ultimately ending Rich's big league career at 26. He outlasted Rob in the bigs by a little under a month, playing his last game on August 4, 1999, while Rob made his last appearance July 10 in a second stint with the Jays.