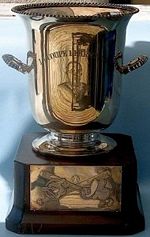 The Pearson Cup was awarded to the winner of an exhibition game between the Toronto Blue Jays and Montreal Expos from 1978-86. The series was revived with interleague play between the two teams staring in 2003, and would continue until the Expos folded in 2004. Games were played in either Toronto or Montreal, except for the final games in 2004 that were played in San Juan, Puerto Rico instead of Montreal; to make things even worse, the final series included a game on Canada Day (Canada's national holiday).

The Cup was named after former Canadian Prime Minister Lester B. Pearson. It is now on display at the Canadian Baseball Hall of Fame.