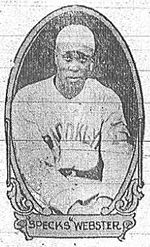 Webster served as a corporal in the 807th Pioneer Infantry during World War I. He died of the Spanish influenza pandemic five days after Armistice Day; he contracted the influenza during the war.