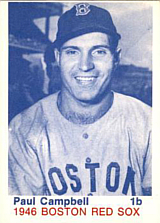 Paul Campbell made his major league debut as a pinch runner for Stan Spence for the Boston Red Sox on Opening Day, April 15, 1941, in a game against the Washington Senators. It was his only appearance of the season, but he returned in 1942 when he hit .067 in 26 games. He was away from baseball for three years as he served in the United States Army from 1943 to 1945. Paul appeared in four more seasons, with his most extensive action coming with the 1949 Detroit Tigers, batting .278/.343/.404 in 87 games.

After his playing career, Campbell managed in the minors from 1952 to 1954. He was the General Manager of the Wilson Tobs in 1956 and Louisville Colonels in 1957, then president of Louisville in 1958. Campbell was then an area scouting supervisor for the Cincinnati Reds in Virginia and the Carolinas from 1959 to 1964 and was responsible for the signing of Tommy Helms. Starting in 1965, he was the Reds' traveling secretary.

While playing for the Montreal Royals in 1941, Campbell set a possible organized baseball record by starting 26 double plays as a first baseman.