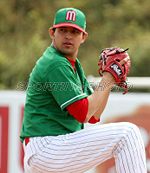 Oscar Rivera has been the most visible pitcher in the Mexican League postseason from 2005-2007. Unfortunately, it is difficult to track his statistics, as major sources like the Baseball Almanac and Pat Doyle database sometimes mix his stats with those of another Oscar Rivera.

Rivera went 7-6 with a 3.92 ERA in 2005. He just missed the league's top 10. With a crucial game seven in the playoffs against the Oaxaca Warriors, led by Felix Jose, the left-hander threw the first postseason perfect game in the history of the LMB. In the next series, he again won game seven with a shutout, 4-0 over the Tabasco Olmecas. This enabled Yucatan to become the second team in Liga history to rally from a 3-0 deficit to take a playoff series.

Rivera was 9-7 with a 3.73 ERA in 2006. He missed the top 10 in ERA for a third straight season and led with 112 strikeouts but again shone in the playoffs. He started the final game of the championship against the Monterrey Sultans and fanned 8 in 7 innings while allowing one run, allowing Yucatan to remain in the contest and win, 2-1, in extra innings. He had gone 2-0 with a 1.57 ERA in the postseason, allowing only 15 hits in 28 2/3 IP while striking out 31, the most of the playoffs.

The left-hander got a shot in the USA in 2007. The Colorado Rockies picked up Rivera from Yucatan with an option to keep his contract for $1.3 million pending a trial. He was 0-1 for the Tulsa Drillers, allowing one hit and three runs (all unearned) in 3 innings. For the Colorado Springs Sky Sox, he was 1-1 with a 4.66 ERA in two games, then was returned to Yucatan. He was 4-2 with a 0.78 ERA in 8 games for the Lions.

In the 2007 Pan American Games, Rivera was 0-1 with a 3.60 ERA, taking the loss against the Gold Medal-winning Cubans.

Rivera helped Yucatan returned to the LMB finals in 2007 by beating the Mexico City Red Devils, 1-0, with a four-hitter. He pitched five shutout innings in his first appearance in the finals but his bullpen blew it in a 4-3 loss to the Monterrey Sultans. He got the call in game seven as they were hoping for his fourth Game 7 playoff shutout in 3 years. He did a solid job, allowing 2 runs in 6, both to Karim Garcia, but was outdueled by Walter Silva in taking a tough 2-1 loss. Despite a 2.97 ERA in the 2007 playoffs and a playoff-best 31 strikeouts in 36 1/3 IP (allowing 23 hits), Rivera was just 2-3 thanks to poor run support.

Rivera struggled in the 2008 Final Olympic Qualification Tournament, allowing 5 hits, 4 walks and 4 runs in 3 2/3 innings. His 9.82 ERA was second-highest on Mexico's staff as they failed to qualify for the 2008 Olympics.