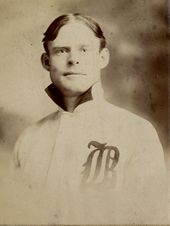 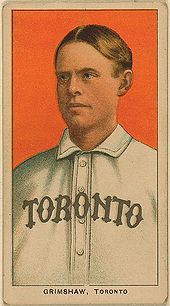 Myron Grimshaw played three seasons in the big leagues, serving as the regular first baseman for the 1905 and 1906 Boston Americans, and as a back-up for the same team in 1907. He also played several years in the Eastern League and several other seasons for Canadian teams. He began his professional career with the London Cockneys in 1898, then moved to the Guelph Maple Leafs in 1899 and the Chatham Reds in 1900.

Grimshaw received the nickname "Moose" while playing for Boston, but relatives say that he was known as "Kitsie" in his home town. After baseball, he was a laborer in a factory (according to the 1920 census) and was working for Beech-Nut when he had a heart attack from which he died. Source: New York Grimshaws.

The New York Grimshaws site has some photos of Myron and also quotes a Sporting News obituary saying he left baseball in 1912 when he was transferred to Indianapolis but refused to report. However, a newspaper obituary quoted on the same site says he quit after being seriously injured when hit by a baseball while playing for Toronto.

While working for Beech-Nut he coached a factory team.