Kenji Hagiwara was an outfielder for the French national team.

Hagiwara's father was a judo artist who moved from Japan to France at age 23 and met Hagiwara's mother there. Hagiwara was introduced to baseball while visiting Japan as a child. He continued playing in France and was admitted to the country's only baseball academy. He also played for the French junior team.

He can speak French, English and Spanish, and knew some Japanese as a child. 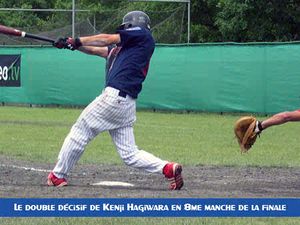 He also spent part of 2007 in the US with Cochise College. He was the third French player in recent years at Cochise, following in the footsteps of Sebastien Herve, who had recommended the program to him.

He also came in second in the Homerun Contest at the 2009 Open international de Rouen, finishing behind Martin Johnson from Quebec.

According to the Rouen 76 website, [1] he was involved in a car accident in January 2009, when the Renault he was driving hit a 150lb boar on the highway; happily, he was not injured in the accident. He describes also being involved in a skiing accident the Alps five years earlier, when he fell 200 feet down the side of a mountain while trying to get his glove.

Kenji is studying at a local business school, going into his second year of studies in 2009.

"The best French player? This is a delicate point to discuss as there is such competition. But if he is not yet, he soon will be, and he is already at least in the top 5." François Colombier, manager of the Rouen Huskies, giving an interview to the Huskies website in 2009 [1]