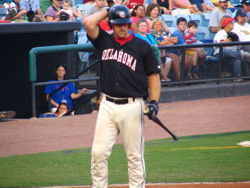 Keith McDonald tied Bob Nieman's record by homering in his first two major league at bats on July 4 and July 6, 2000. He had three major league hits, all of which were homers -- he is the only player in history to accomplish that feat.

Keith retired with a major league line of .333/455/1.333, getting three home runs in nine at-bats, and also receiving two walks.

Although Keith was born in Japan, he did not play pro ball in Japan.