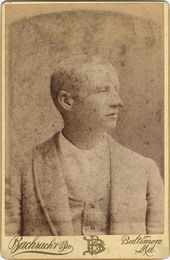 "John Kerins had a solid year in 1886 for Louisville. He was headed for an even better one in 1887 before breaking his right hand . . . Kerins . . . was never the same player." - from the book The Beer and Whisky League, which features a baseball card of him

John Kerins played seven years in the majors and briefly managed twice. He played first base, outfield and catcher, and led the American Association in triples in 1887.

Kerins was born in Indianapolis, IN and played at Fort Wayne as well as with an independent Indianapolis team before coming to the majors with the 1884 Indianapolis Hoosiers. The bulk of his career was spent with the Louisville Colonels.