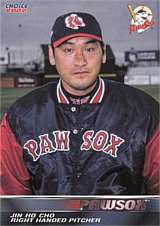 Pitcher Jin Ho Cho was the second South Korean to play in the major leagues and the first to play for the Boston Red Sox. In parts of two big league seasons, he was 2-6 with a 6.52 ERA

Cho headed to the SK Wyverns of the KBO in 2003 following his stint in organized baseball and went 4-5 with a 5.20 ERA. In 2004, he admitted spending almost $50,000 to have his urine test doctored to avoid military service; Cho's actions had been uncovered as part of a large scandal in South Korea. He spent 8 months in jail due to his crime and then spent 26 months in the military, where he had Tommy John surgery. By the time his military service ended, there was little interest. The Samsung Lions signed him in 2008 without any bonus and for a salary very low for someone with his experience. He began the year in the minors, going 0-3 with a 7.20 ERA, but was called up with Young-soo Bae ailing. He threw six shutout innings for a win in his first game back in the KBO after his five-year hiatus. He finished 5-9 with a 5.99 ERA in parts of three KBO seasons, later becoming a Samsung coach.