Note: This page links to Jim Willis, the 1950s major leaguer. For the Negro League pitcher of the 1920s and 30s, click here. 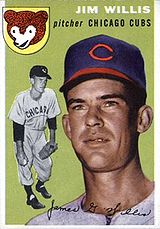 Right-hander Jim Willis had his greatest success on the mound in pro ball in his home state of Louisiana. He started out as a 22-year-old pitcher with the Alexandria Aces of the class C Evangeline League in 1949, as an unattached free agent. Jim wound up his first year in the pros with a 14-5 record with a 3.16 ERA. Jim, still unattached, pitched for three different clubs in 1950, the Greenville Majors, Monroe Sports and the AA Shreveport Sports winding up the year with a 10-9 record and a 4.30 ERA.

Willis spent the 1951 and 1952 seasons with with the Texas League Shreveport team again, going 15-10 with a 3.65 ERA for a dead-last eighth-place club in 1951. Jim went 16-11 with a 2.72 ERA the following season, helping the 1952 team go from last place to the third spot and wound up winning the league playoffs. This undoubtedly finally got him attached as the Chicago Cubs drafted Jim from Shreveport on December 1st in the 1952 Rule V Draft.

Jim did a creditable job for the Cubs in 1953, going 2-1 with a 3.12 ERA in 13 games. But he was gone after losing his only decision in 14 appearances for the Cubs the following season in 1954. This finished up his two-season major league run with a 2-2 record and a 3.39 ERA. Willis dropped back into the minors and finished out his run there back with Shreveport in 1959. Jim's eight-year minor league stat sheet showed 75 wins with 58 losses and a career 3.60 ERA.

A graduate of Northwestern State University of Louisiana with a degree in education, he was an elementary school teacher and later principal until his retirement in Boyce, LA.