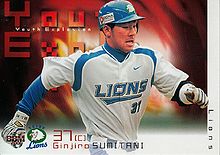 Ginjiro Sumitani has been a backup catcher for the Seibu Lions for several years.

Sumitani was a second-round pick in the 2005 draft. He debuted as a teenager, hitting .181/.193/.290 in 54 games in 2006 as the backup to Toru Hosokawa. On March 29, he hit a grand slam off D.J. Carrasco in his 4th game as a pro, only the 5th player straight from high school to hit a grand slam in his first year in NPB. He also became the first rookie out of high school to homer twice in a game since Hideki Matsui 13 years earlier.