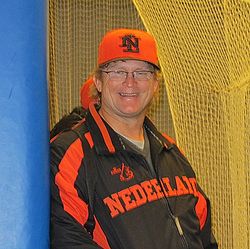 Eric de Vries was a star pitcher in the Netherlands and played in the Olympics.

De Vries debuted in the Hoofdklasse as teenager with HCAW in 1979; he would pitch for them through 1982.

De Vries was pitching coach for the Pioniers in 1995 and held that role when they won the Hoofdklasse pennant in 1997. He later coached for HCAW and opened a pitching academy. He coached for the Belgian national team at the 2003 European Championship. In October 2009, he became the pitching coach of the Amsterdam Pirates.